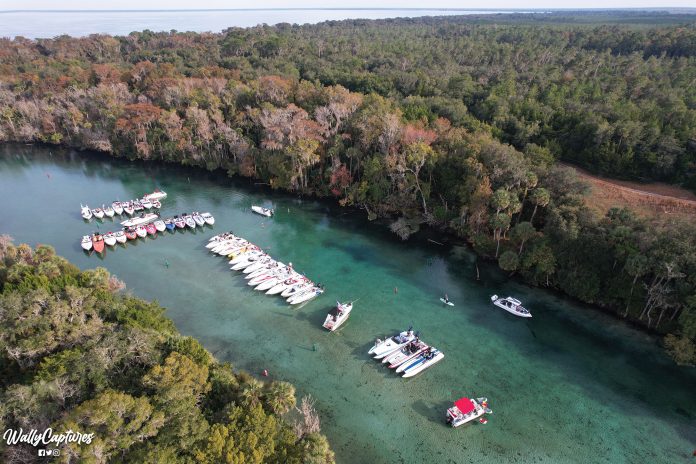 The Toys Tour had some incredible stops including the crystal-blue waters of Silver Glenn cove.

A record fleet of 136 powerboats boats made the holidays a little brighter for children in Florida at the annual charity Toys Tour sponsored by Velocity Powerboats.

Beautiful Putnam County in northern Florida was the backdrop for the Toys Tour, a three-day extravaganza in early December. Boaters collected thousands of gifts for the Putnam County Sheriff’s Department to distribute to children in need for the Christmas holidays.

The Toys Tour was founded 21 years ago by the late Rus Matos, delivering thousands of toys for children over the decades. This year was no different as boaters from as far away as Connecticut, Michigan and New Jersey came out to support the toy drive.

The event has a low entry fee ($65 presale) but the events as part of the Toys Tour are worthy of high-end poker runs.

“The mission is for a 100 percent charitable event, and we want to keep it that way,” said Velocity Powerboats owner Scott McCormick, whose company organized this year’s Toy Tour. “Every dime goes back to the event.”

Participants and the community responded by delivering toys to the tour stops, either by boat or car. The event was open to all boats but had a large high-performance contingent to enjoy the scenic area.

The Friday fun run had 65 boats participate in the famed Dunns Creek run, the winding section of the St. Johns River until it reached Crescent Lake. Once on the lake, the boaters stopped at Three Bananas for lunch.

The Friday night kickoff party featured favorite local food trucks. Louie Matos was the party’s MC and DJ, who is the son of the late Toys Tour founder. The night cap a comedic hypnotist.

Velocity Powerboats’ McCormick led the pace boat after the Putnam County Sheriff’s Office gave the approval to start after morning’s dense fog lifted. McCormick led the boats to the interstate bridge where Freeze Frame took photos of each boat running in the event. Participating poker runs receive a free photo

At the first stop, the poker runners were greeted at the Welaka docks by a large presence of Putnam County Sheriff’s office employees. Boaters formed a single-file line and handed off their toys to the officers. The Toys were then taken to a warehouse where they are sorted and distributed to underprivileged and domestic violence kids.

Next stop was at Renegades on the River, a co-sponsor, where boaters were served lunch. Then it was off to the majestic cove Silver Glenn, featuring 72-degree clear spring water and after the raft party at Silver Glenn, it was back to Crystal Cove Marina.

Saturday night’s banquet spared no expense with Michael Ciasulli calling the poker run and party “by far was the best event he has ever been to.”

Mai Oui Gourmet, a Jacksonville cater, handled the food severing up oysters, sushi, prime rib, and ceviche for the VIP guests. Hookahs and a cigar roller were available as the night closed to live music.

For the first time, the Toys Tour and Putnam County Sheriff’s Office held a party for 20 select kids in the same spot from the previous night’s festivities. The kids got to walk the red carpet from the night before and go up on stage, where Santa and Mrs. Claus greeted them to pick out some Toys.

“This is what it is all about,” said Toys Tour Executive Director Walt Braithwaite. “To see these kids’ faces light up that morning makes me even more passionate to make this even a bigger event next year.”

About 40 boaters got an extra day of Florida sunshine completing the last run to Jacksonville, stopping at Whiteys Fish Camp to be treated to a fish-fry lunch.

“This year we added an extra run for those who wanted to stay and take in some more Florida weather,” said Braithwaite, who is already starting work on the 2022 Toys Tour set for Dec. 2-4, 2022.