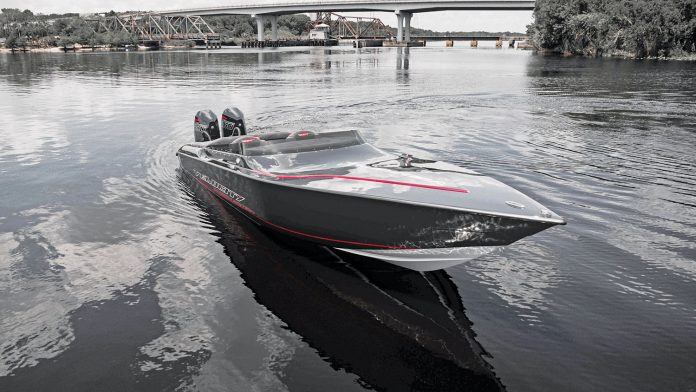 Velocity Powerboats owner Scott McCormick keeps tabs on the used boat market and still sees strong demand for performance sport boats. It’s one of the reasons he continues to build sport boats when other high-performance builders have moved onto center consoles.

“I remember three years ago telling everybody I’m bringing high performance back, there is a huge void and a huge market,” McCormick said. “I watch the metrics on all these different selling sites and people are gobbling up all these old race boats, old performance boats. The reason why they’re paying so much is because nobody’s offering them.”

Sport boats have been a mainstay since the Sanford, Fla., builder was founded in 1976 and McCormick doubled down on the approach after buying the company three years ago. While updating the tooling on the models, Velocity started offering several of its V-bottoms with outboards.

One of the models to get outboards was the Velocity VR1, a V-bottom introduced in 2001. The boat was fast with sterndrive power as McCormick knows having raced it on the offshore tour. The latest version—VR1 Carbon Edition—with twin Mercury Racing 450R outboards has McCormick smiling.

The VR1 reportedly ran 115.7 mph on Lake X during testing and when it came to acceleration and fuel economy, McCormick doesn’t see buyers going back to sterndrive power for the VR1. An older sterndrive version with similar horsepower is reportedly 10 mph slower, he said.

“These (Mercury) 450s are so bulletproof,” McCormick said. “You just hang them on the back, a three-year warranty out of the gate and you’re running 115 mph with full warranty. How could you ever say no to that?”

Velocity built the first VR1 Carbon Fiber edition for Southwest Florida resident Doug Dulak, who bought it as a retirement present. Doug Harrell Designs handled the paint and the carbon fiber was an aesthetic upgrade that also helped to stiffen the 28-foot boat.

To handle the 450-hp outboards, Velocity modified the rear running surface and retooled the entire transom to allow the outboards. Porta Products in nearby New Smyrna Beach, Fla., supplied the transom brackets.

The bulkhead is moved back 20 to 30 inches depending on the seating arrangement. A U-shaped configuration offers the most cockpit space, while the standard bench adds 20 inches versus the sterndrive version. McCormick used the opportunity to redesign the deck for better airflow.

The VR1 required moving the boat’s center of gravity forward about 30 inches and then McCormick spent the next two days at Mercury Marine’s Lake X testing motor heights and props to dial it in.

“We finally got it set up to where I could practically run that thing at 110-mph with no hands on the wheel,” McCormick said.

The V-bottom cruises at 70 mph and was getting 2.3 miles per gallon, which offers a range of over 200 miles with the VR1’s 100-gallon tank. Velocity is offering the 28-footer with twin outboards or a single with Mercury Racing 300R as base power.

Dulak’s 115-mph rocket ship had an Alcantara interior and the Simrad screen was in the center of the helm with Monster gauges and controls from Livorsi Marine. The cabin includes a large forward V-berth with a bed cushion and facing couches. A portable toilet comes standard. Buyers can add air conditioning to keep the cabin cool on warm days.

The Velocity VR1 is also available as mid-cabin open bow or optional deck hatches are available for the closed-bow version. McCormick said his goal is to make each model, which ranges from 22 to 43 feet, as feature rich as possible.

“All the things that a lot of people charge options for, I just include it because I want to build the boat the way I would want the boat to be,” McCormick said. “I don’t want to be nickel and dimed with all these options.”

“There are people out there that miss the growl of the big blocks. We all miss it, we all love it,” McCormick said. “You can growl all you want but when I come by you at 15 miles per hour faster than you’re going, that makes a huge statement.”